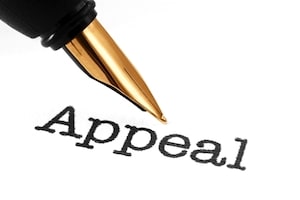 At the end of a trial, an Order or Judgment is filed. The case may not be over, however, as one of the litigants may not be satisfied with the result and may want to appeal the Court’s decision. In state court in North Carolina, the appeal would be to the North Carolina Court of Appeals, or in appropriate circumstances to the North Carolina Supreme Court. In Federal Court, the appeal would be to the United States Court of Appeals for the Fourth Circuit. Generally, a party wanting to appeal has 30 days from entry of the Order of Judgment to file the Notice of Appeal.

Unlike the trial where you get to present evidence and testimony, an appeal involves a review of the trial court’s decision. After the notice of appeal is filed, the party appealing (appellant) must timely order the trial transcript and prepare the record on appeal. The record on appeal normally consists of the court pleadings (lawsuit, answer and reply), the trial court’s decision, the notice of appeal, the proposed issues on appeal, exhibits introduced at court, and the trial transcript. It is imperative that the appellant meet with her attorney early in the process to outline the possible issues for the appeal and to make sure the record is complete for the appeal.

After the record on appeal has been settled and filed with the court of appeal, the next phase is the writing of the briefs. The purposes of the appellant’s brief are to explain how the trial court erred in its ruling and how the court of appeals can fix it. The party defending against the appeal (appellee) will respond with his own brief, and then the appellant can file a reply brief. After the briefs are submitted, the court of appeals will make its decision based on either the briefs and/or an oral argument. In the North Carolina Court of Appeals, a three-judge panel makes the decision (a three-judge panel makes the decision as well in Federal Court for the Court of Appeals for the Fourth Circuit). In the North Carolina Supreme Court, all seven judges decide the case. After the appeal has been decided, the trial court’s decision is either affirmed, reversed or the case is remanded back to the trial court with instructions on how to fix the errors.

Deciding whether to appeal a Court’s order or judgment is an important decision. Considerable time, money and effort are expended on an appeal. However, appeals can be useful when problems occurred with evidence submitted or excluded, or with the Court’s application of the law to the facts. Our attorneys have significant and successful experience with appeals at the federal level (Fourth Circuit Court of Appeals) and at the state level (North Carolina Court of Appeals and North Carolina Supreme Court), including oral arguments at all of those Courts. One of our attorneys has also served on the North Carolina Bar’s Appellate Rules Committee.

If you need to defend against an appeal or if you think you may want to appeal, our firm is extremely qualified to act as your Charlotte appellate attorney. If you have an appeal of a case in Charlotte or the surrounding area, let the lawyers of Thurman, Wilson, Boutwell & Galvin P.A. help. Call us today at (704) 377-4164 or submit our online form.

Contact Us
Practice Areas
Client Reviews
★★★★★
What a great professional experience I have had working with Mr. Galvin! His straight-forward, honest approach has helped me both personally and professionally in many ways. He is always there when I need him. Jason Jones
★★★★★
I recently engaged the legal services of James Galvin, Esq., to assist me in a foreclosure case brought by a bank. He skillfully and thoughtfully negotiated a very successful conclusion with a nominal cash settlement of an otherwise considerable debt. I can thoroughly recommend the use of his services. A.G.
★★★★★
James Galvin is the most honest and forthright attorney I ever met. He has been a pleasure to work with. If I ever need an attorney again, James will be my choice. I know he will work hard on your behalf to help resolve the matter to your best interest. David L. Lively
View More
Submit a Law Firm Client Review