One of the great joys in my practice is when I can get to know clients over many years, steer them in the right direction with legal counsel, and put out fires for them and their businesses along the way.

John has been a trial lawyer for over 27 years. Although he realizes it is normally better to resolve cases for clients without a trial, John enjoys the trial process. John’s civil litigation includes a focus on construction, family and domestic, real estate, and a variety of business and contract disputes.

In John’s construction practice, he represents both homeowners as well as general contractors and subcontractors. This practice includes preparing and reviewing construction agreements, resolving disputes with homeowners, site visits, filing liens if necessary, representing contractors with the North Carolina Licensing Board for General Contractors, and representing his clients at arbitration and trial. Many of these disputes involve claims for money owed, defective work, negligent construction and/or wrongful termination.

In John’s family law practice, he has extensive experience with all aspects of a domestic dispute – from preparing premarital agreements and separation agreements, to mediation or arbitration, to numerous trials and appeals. Frequent claims include breach of contract, child custody and child support, alimony, and equitable distribution, as well as lawsuits alleging alienation of affection.

In John’s real estate practice, he represents both buyers and sellers, as well as real estate agents with the North Carolina Real Estate Commission. Common disputes include termination of a purchase contract, misrepresentation of the property’s condition, and involve potential legal claims for breach of contract, wrongful termination, misrepresentation, fraud and/or perhaps unfair and deceptive trade practices.

John has built up a reliable and solid reputation with the Judges and with opposing counsel. He has been recognized as a North Carolina Super Lawyer in 2020. John previously served on the North Carolina Appellate Rules Committee, and currently serves on the Litigation Council.

John was born and raised in North Carolina. He attended Baylor University in Texas for his undergraduate degree, and came back home to North Carolina to attend law school at UNC – Chapel Hill. By far, the best part of his law school experience was going to Tarheel basketball games, seeing Coach Dean Smith at a Chinese restaurant after church on Sunday, and celebrating on Franklin Street when UNC won the national championship in 1993.

After graduating from law school, John began practicing law in Charlotte and has remained with the same law firm. John’s wife Hilary is a nurse, and they are blessed with three great children – Emma, Ethan and Gavin. John enjoys being outdoors. He began participating in triathlons and worked up to a half-ironman, and then he started running longer races such as marathons (including the Boston Marathon). 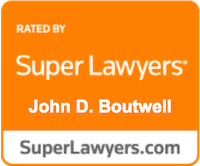 To read about the Super Lawyer's selection process, click here.

Contact Us
Practice Areas
Client Reviews
★★★★★
John greatly assisted me in my divorce. It was a very complicated and entangled situation which John was able to resolve expertly for me. My ultimate goal was to be able to walk away from my ex-husband with no strings attached and John was able to do that for me. It was the best money I ever spent! Vangie
★★★★★
John Boutwell helped guide me through the legal process during an extremely difficult time for me and my family. He was always there when I had a question and I knew I could count on him to give me honest advice. I would recommend John to anyone seeking legal assistance. C.M.
★★★★★
After losing my case, I filed an appeal, recognizing that there had been judicial error in its handling. I sought a lawyer who would work efficiently with me to handle the appeal. In record time, John understood the needs of my case and expertly crafted the appeal, and winning my case for me, by unanimous verdict. I recommend him as an advocate without reservation! E.A.W.
View More